Etusivu IN ENGLISH COMPANY Our Story 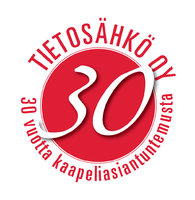 Tietosähkö Oy was founded in the Ollikainen family home as a successor to the one-year-old one-man business Pitol. Early in 1985, the new firm rented premises from the Vähänummi industrial area. Tietosähkö Oy delivered the first cable orders to its customers on May 15th 1985.

In 1985, when the company started its business, it had five employees. The following year the number of emplyees grew to 12, and the company’s turnover was 3.3 million Finnish marks. The company grew quite fast in the late 1980s with a steep rise in sales volume. In 1988, for instance, its turnover and number of employees grew over 80 percent, and in 1990 the sales volume was already 9 million Finnish marks.

The Development of Our Business

Importing business began in the spring of 1985 when we made our first purchases from Germany and Italy. Importing from Taiwan began in 1988, and in late 1989 the volume increased. Tietosähkö carried out its first computer system installation in 1984 for Orion’s Soredex utilizing IBM twinaxial cabling. Tietosähkö also manufactured a wide variety of telecommunication adapters and switching devices for linking telephone lines in the years 1984 to 1994. Tietosähkö manufactured, for instance, Viking Line cruise ships’ automatic switching devices that were used to guide the routes of the different shipping companies in Helsinki and Stockholm. We also produced switching devices for the computer centers of the Finnish banks SYP, KOP and SKOP. Tietosähkö also manufactured and installed products for Token Ring 16 Mbitsps and 10Base-T networks.

In the 1990s, the most popular products were our own wall outlets: the uninterruptible ThinNet ethernet outlet, protected D9 wall outlet for Unisys PC-51 network and the new CAT5 outlet. Moreover, Tietosähkö offers a wide variety of its own products for coaxial networks (connectors, cables, wall outlets and panels).

In the spring of 1992, due to the recession, Tietosähkö reorganized its business. Installation operations were closed down and 8 employees were laid off. At this point, the company had a significant amount of debt that originated from building the Ahertajankatu 4 facilities and warehouse in 1987-1988 and 1991.

Production of plastics has also been part of our business since 1992, when the first plastic mold was made for Tietosähkö. To this day, Tietosähkö produces injection molded components along with low-pressure molded cables. Plastic products were designed mostly in the years 1992 to 1997 when we produced 15-20 molds per year. In 2003, we invested in an injection mold machine that is capable of single-piece production. Since then, all our new products have been manufactured with our own machines and molds. However, plastic production has been modest and focused mainly on wall outlets and a few components needed in our own manufacturing business.

The Two Subsidiaries of Tietosähkö

The first one was called Lanmetalli and it specialized in metal working and producing plastic molds as well as components for connectors and cell phone antennas. Lanmetalli was founded in 1995 and it was expanded in 1997 by establishing a sheet metal division. The sheet metal division’s business was based on Tietosähkö’s own orders from its cabinet division. External customers comprised circa 15 percent of Lanmetalli’s turnover. Lanmetalli was closed down in 2003 and its two automatic lathes were sold.

In 1998 a second subsidiary, Oltron Oy was founded. It focused on the assembly process in the production chain, while the parent company provided the commercial contact to the outside world. Between the years 2001 and 2003, Oltron had more employees than the parent company. In 2000 Oltron ordered an RJ machine production line from TECONO Oy. The total cost of the production line was over two million Finnish marks. The machine never became fully operational. Oltron was closed down on 18th September 2001. All Oltron’s employees were transferred to Tietosähkö, and business continued under one company and in one address.

Significant Changes in the 2000s

Tietosähkö’s turnover reached its all-time high in 2001, when the group's turnover was around 5.2 million euros. After 2001, however, was followed by three years of adjustment as our turnover diminished rapidly.

2009 The founder and owner of Tietosähkö, Heikki Ollikainen passed away on a skiing trip in Northern Norway. Long skiing and kayaking trips with his old friends from the Scouts were important for Mr Ollikainen. His dream had been to create a workplace, where there would be all the necessary facilities to develop technically advanced high-quality products for cabling. Mr Ollikainen’s principle was to invest continually in the company to secure its future success. His dreams came true, and now the next generation carries them on.

2010 Our biggest customer Tellabs (Coriant) relocated their entire production to Malaysia. At the time, Tellabs made up around 60 percent of our turnover.

Between 2010 and 2020, Tietosähkö focused on special cables and invested in testing and production equipment. In the future, we will continue our investments in production at our facilities in Finland. The chief asset of Tietosähkö’s production is speed. Quick delivery has always been our biggest selling point. One of our fundamental business principles is to deliver technically superior products. Accordingly, we have increasingly focused on special know-how and training in the recent years. Tietosähkö Oy is also a LEMO-certified service and production point in Finland and an official service point for Neutrik connectors.

Tietosähkö Oy since 1985 I Our Story
Powered by